Google powermeter is a free energy monitoring tool that allows you to view your home’s energy consumption from anywhere online. Smart meters are the enablers for the smart grid. The concept of smart grid, nicely described by Thomas L. Friedman in the book Hot, Flat, and Crowded 2.0, is becoming a reality.

Below one screenshot of Google powermeter, taked from the blog post Energized about our first Google PowerMeter partners. 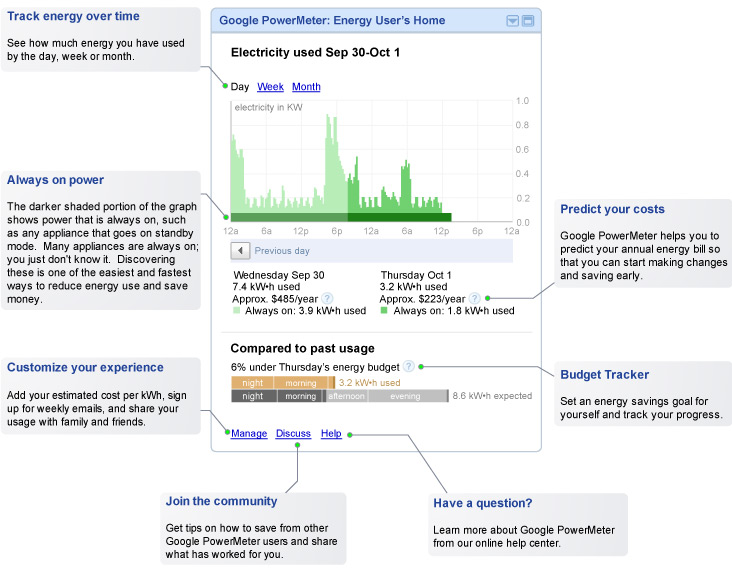 Google introduced the powermeter concept 1 year ago. San Diego Gas & Electric is one of the first utility companies to partner with Google. This month my area will be covered and I will know more about it.

From Wikipedia, a smart grid delivers electricity from suppliers to consumers using two-way digital technology to control appliances at consumers’ homes to save energy, reduce cost and increase reliability and transparency. It overlays the electricity distribution grid with an information and net metering system.

Companies are working on creating the Database of Intentions. They want to know us, our interests and in a way they are succeeding.

Google has been the leading the group. By using Search it knows what we want in a particular moment. Twitter and Facebook added the social part, they know who we know. Twitter at Chirp announced that they target the real-time interest graph. Everybody wants to own people’s interests.

From the blog post of Mark Zuckerberg, Building the Social Web Together:

Facebook has focused mostly on mapping out the part of the graph around people and their relationships.

At the same time, other sites and services have been mapping out other parts of the graph so you can get relevant information about different types of things. For example, Yelp maps out the best local businesses and Pandora maps out which songs are related to each other.

This next version of Facebook Platform puts people at the center of the web. It lets you shape your experiences online and make them more social. For example, if you like a band on Pandora, that information can become part of the graph so that later if you visit a concert site, the site can tell you when the band you like is coming to your area. The power of the open graph is that it helps to create a smarter, personalized web that gets better with every action taken.

What would be the ingredients for an interesting application or service?
My first thoughts: