Strategy is about making choices. You cannot be ambiguous, in order to execute you have to set clear objectives and goals.
But making clear goals is important as being flexible and have options if something goes wrong or does not go as planned. And actually, things never go according to plan.

That’s the reason of the long discussion and arguments of deliberate versus emergent business strategy. Essentially, Porter versus Mintzberg business strategy theories. A nice article on Fortune discusses the two Porter or Mintzberg: Whose View of Strategy Is the Most Relevant Today?.
The two theories are both very interesting and fundamental in the business strategy world.
Porter’s books are a must read:

Mintzberg’s books are a must read too:

Given this premise and introduction is interesting to consider the case of Nokia. With Elop, Nokia has made the clear strategic choice of a Microsoft Windows only smartphone operating system. However, the choice of exclusivity is only on one side, Nokia. Microsoft is still free to license the OS to other OEMs and eventually to make its own smartphones and tablets using the same OS.

And here it comes an interesting analysis by a former Microsoft veteran, Microsoft’s Pivot — A Plan to Dominate “Devices and Services” that says “When Microsoft launches a ‘Sur­face Phone’ it is quite sim­ply game over for Nokia.”

“Microsoft’s pub­lic pro­nounce­ments about the impor­tance of the OEM in the wake of the release of Sur­face are more than a lit­tle disin­gen­u­ous. Microsoft finally does appear to have crossed the rubi­con in regards to the long-term value of their OEMpart­ners. The com­pany appears to embark­ing on a strat­egy that — while accom­mo­dat­ing the OEM chan­nel — is not going to throw them a life raft. OEMs who do not already have an alter­na­tive busi­ness strat­egy when Microsoft becomes their largest and most agres­sive com­peti­tor are in deep trouble. Ironically the OEM chan­nel is about to com­mit col­lec­tive sui­cide while enabling Microsoft to become their executioner.

Microsoft des­per­ately needs the OEMs right now. They are needed because that’s the only way to get Win­dows 8 into the hands of hun­dreds of mil­lions of con­sumers. But — wit­tingly or unwit­tingly — the OEMs are act­ing as the vec­tor for the “Virus” that will ulti­mately kill them off. Once a crit­i­cal mass of con­sumers have become hooked on Win­dows 8 Microsoft will have estab­lished the reach and cred­i­bil­ity of the oper­at­ing sys­tem that is required to exe­cute the company’s devices strategy.

Once Microsoft has its own vol­ume device capa­bil­ity it will have no strate­gic need for the OEM chan­nel. Microsoft’s mes­sage to the OEMs can be summed up as “Enjoy the ride while it lasts.”

Per­haps the com­pany most likely to be impacted by Microsoft con­sumer devices strat­egy is Nokia. I have absolutely no doubt that Microsoft is going to become a man­u­fac­turer of a full range of Win­dows 8 based smart­phones. That is going to hap­pen sooner rather than later. When Microsoft launches a ‘Sur­face Phone’ it is quite sim­ply game over for Nokia.”

And this is pretty much in line with Asymco’s post Nokia’s price for exclusivity in which is stated: “Nokia’s failure is not so much having chosen the wrong alternative to Symbian, but having chosen exclusively.”

Exclusivity could have been be the right choice, but what happens when it is not? Strategic flexibility is essential in business strategy. While understanding and fully  learning from Porter is essential, Mitzberg’s approach seems to be key in the complex and fast world we are now living. If you put all the eggs in one basket, you have to be ready to move them if things do not work out.

With the success of 3D printing and the pioneer Makerbot we are seeing also a discussion on whether Open Source Hardware is a sustainable business. Recently Makerbot has made some changes that have made the Open Source Hardware movement unhappy. See the point of view of Makerbot and then a reply to that.

And an opinion from Rob Giseburt in the Make Makazine Is One of Our Open Source Heroes Going Closed Source?

We are living and experiencing a revolution. And Chris Anderson goes to the point with his latest book, Makers: The New Industrial Revolution. How could I immagine that I would be able to scan and then 3D print myself? Instead, this is possible now. While it is still a bit for geeks, the makers revolution will bring this to every house and make 3D printing and like paper printing.

The software you need is:

To take the photos I used my Canon D60. To print the model I used the Thing-o-Matic from MakerBot 3D printer. 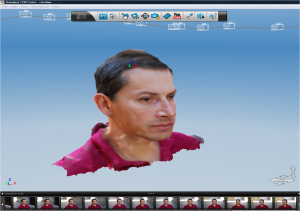 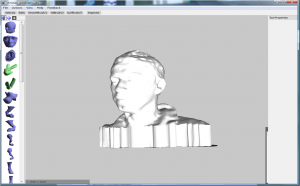 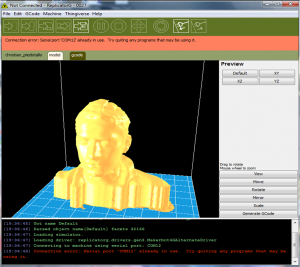 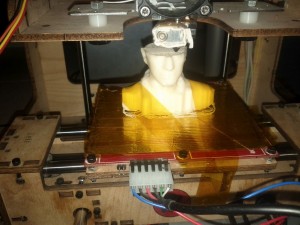 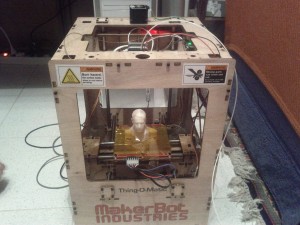 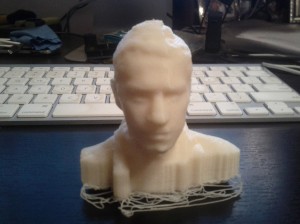