Apparently making software alone does not guarantee profits. Google has acquired Motorola and Microsoft has just announced a tablet. Integration of software and hardware ensures the best possible user experience, as Apple has taught us, but probably another lesson is that the integration provides more profits as well.

Gruber in his blog, commenting on the Microsoft tablet Surface, writes:

The message I took away is that Microsoft has concluded that, ready or not, it needed to move now. There is no longer enough profit to be had selling software alone.

If you want a more quantitative visualization, you can read Asymco blog post Who will be Microsoft’s Tim Cook?

As previously noted, Apple has overtaken Microsoft (and Google) in operating margin percentage. This is an astonishing statistic as Apple is still largely perceived to be a “hardware company” while Microsoft is a “software company” and Google is a “services company.

To suggest that “hardware” could be more operationally profitable than either software or services is akin to heresy in technology analysis. This reversal is newsworthy indeed. However, even the most casual observer would note that Apple does not derive its market power from hardware alone. It is, in fact, an integrated hardware, software and services company (with a few more roles besides.)

The previous post from Asymco is Which is best: hardware, software or services?. Operating margins: Apple 39%, Microsoft 37%, Google 33% 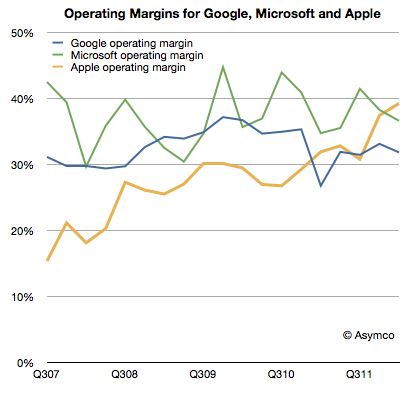